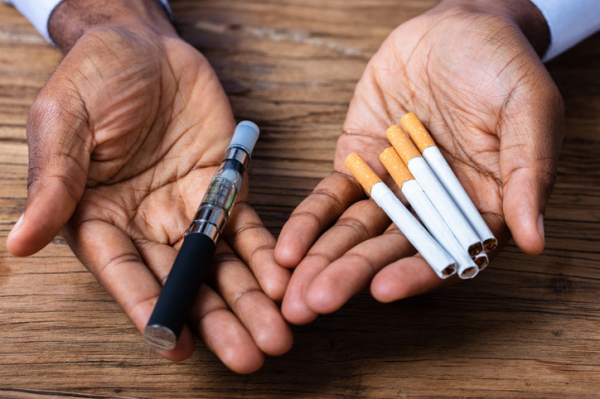 Lately it seems like everywhere I look, someone is vaping as they walk by, stand outside a store, or roll up in the car next to me at a stoplight. It’s not surprising: e-cigarette use, or vaping, has become remarkably popular in recent years. About 6% of adults in the US now report vaping. That’s about 15 million people, double the number from just three years ago. Of course, regular cigarettes are known to cause cancer and a host of other health problems.

While considered less harmful than smoking tobacco, vaping isn’t risk-free. We know some, but not all, of its risks. We also know vaping is increasingly popular among teens and young adults, and this makes the recent FDA announcement authorizing sales of three additional vaping products surprising.

A surprise announcement from the FDA

In its announcement, the FDA authorized the R. J. Reynolds Vapor Company to market and sell its Vuse Solo device with tobacco-flavored vaping liquid to adults.

The FDA denied marketing authorization for 10 flavored products made by the same company. It also reports having denied more than a million flavored vaping products from other companies.

By the way, the agency emphasizes it is not actually approving these vaping products, or declaring them safe. The announcement states that marketing authorization will be reversed if

Why did the FDA take this action?

The decision was reportedly based on data from the company — unfortunately not provided in the press release — demonstrating these products would benefit individuals and public health. How? By helping smokers quit.

Some studies have suggested that e-cigarette use can be modestly helpful for smokers trying to quit. For example, an analysis of 61 studies found that e-cigarette use was more effective than other approaches to quitting smoking. The study authors estimated that out of every 100 people who tried to quit smoking by vaping, nine to 14 might be successful. When only using other methods, such as nicotine patches or behavioral counselling, only four to seven smokers out of 100 might quit. A separate study suggests vaping may help smokers who aren’t able to quit reduce the number of cigarettes smoked per day — at least for six months, the duration of the study.

Despite claims that vaping is less harmful than smoking cigarettes and that it might help smokers quit, concern about its risks is well deserved.

For teens and children, vaping has additional risks

An alarming number of middle-school and high-school age kids report vaping, despite the nationwide prohibition against selling e-cigarette products to anyone under age 18 (21 in some states). Its popularity is partly related to the marketing of flavors known to appeal to minors, such as bubblegum and berry-flavored products. According to one national survey, approximately 85% of teen vaping involved non-tobacco flavored products.

It’s important to know that

For nonsmokers and teens, there is no controversy: don’t start smoking and don’t vape.

If you’re an adult smoker trying to quit, be aware that the balance of risks and benefits and the long-term health consequences of vaping are uncertain. We need more solid research to help people make decisions. Meanwhile, the FDA has come down on the side of a limited authorization to help adult smokers quit. We’ll know only in retrospect if that was the right move.